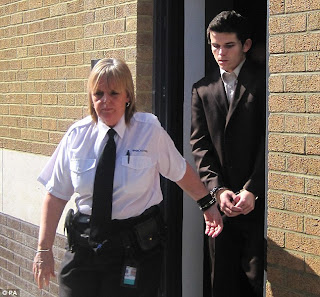 A student who mocked the footballer on Twitter after he collapsed today lost his appeal against a 56-day jail term.

Liam Stacey, 21, of Pontypridd, south Wales, sobbed as he was taken away following the failed sentence appeal hearing at Swansea Crown Court.
Mr Justice Wyn Williams told him he rejected an argument that Stacey had already been punished enough.

'He was intending to say what he said and was intending to produce the effect that he did.'
The court heard Stacey has been treated as a 'pariah' by other prisoners since he was locked up.
High Court Judge Mr Justice Wyn Williams told him: 'There can be no avoiding the conclusion that your offence was committed in the context of a grave illness that had afflicted Fabrice Muamba.

'It was immediately apparent that he was gravely ill and while he was lying prostrate on the pitch you posted comments that were extremely racist couched in terms that can only be described as extremely offensive.
'What was written was capable of being read by any user of Twitter and these messages provoked a very strong response.
'You received responses which were extremely critical but you did not desist - instead you posted eight messages which were extremely abusive and insulting.
'You later realised the enormity of your behaviour and tried to apologise. But you deserve to be punished for your actions. It can’t be argued that a term of 56 days is too long for this offence.
'By pleading guilty you admitted a racist intent to your comments.'

Stacey was watching the FA cup match between Spurs and Bolton Wanderers on TV when Muamba fell to the ground.
Earlier he had been drinking while watching Wales win the rugby Grand Slam match against France.
Stacey Tweeted: “LOL, F*** Muamba. He’s dead!!! £haha,” - then posted eight further offensive racist messages.
Stacey was jailed for 56 days on Tuesday after admitting racially aggravated harassment and disorder.
The reviled tweet came at a time when the Bolton midfielder's plight was attracting a wave of sympathy around the world.
Football fans watched in horror as Muamba collapsed after suffering a heart attack during the FA Cup clash.
Millions witnessed the incident at White Hart Lane as Bolton's clash with home team Tottenham Hotspur was screened live on television.
But after a drunken Stacey received a deluge critical replies to his distasteful tweet, he responded with a torrent of racist abuse on the website.

Support for Stacey’s jail sentence was widespread on the day it was handed down, and widely debated on Twitter.

But a significant minority criticised his punishment and claimed it was politically motivated to make an example of him.

His legal team will tomorrow launch an appeal against his sentence at Swansea Crown Court.
The hearing, which is expected to last at least one hour, will go before High Court judge Mr Justice Wyn Williams.

The messages were forwarded to the police by several members of the social network, including former England striker Stan Collymore, himself a victim of abuse on Twitter.

Stacey initially claimed his account had been accessed by somebody else, but later pleaded guilty to racially aggravated harassment, and was sent to prison to ‘reflect the public outrage’ at his comments.
Posted by maisha at 4:53 PM